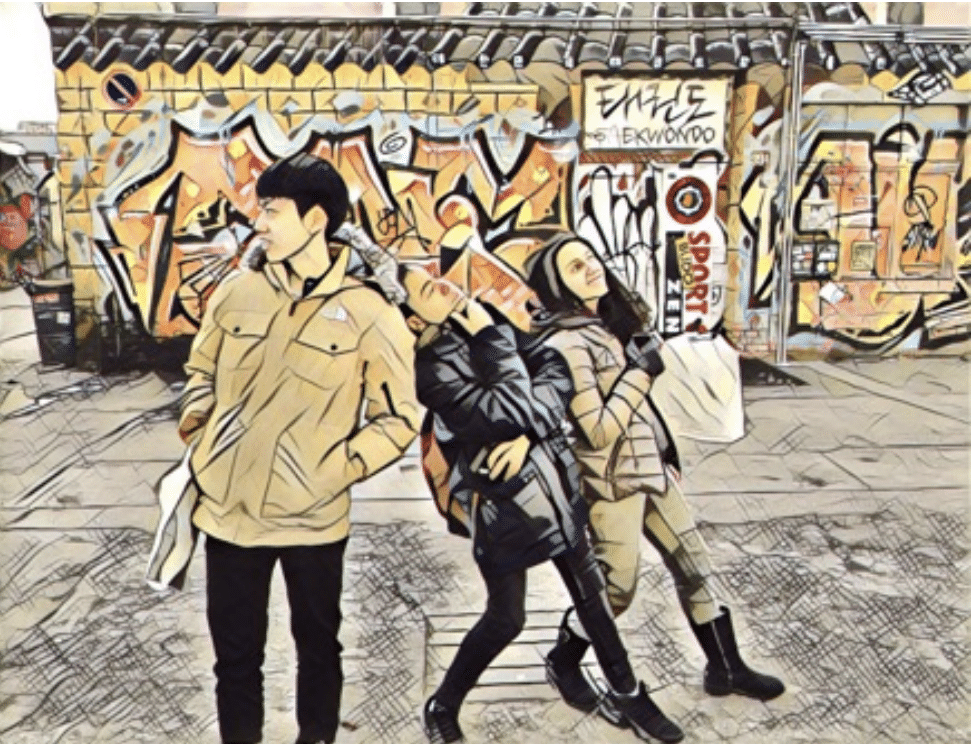 The journey to Berlin was very pleasant because we got the luxury of traveling by airplane. The first two days, Thursday and Friday, were mostly focused on exploring Berlin and its history. We visited several history museums, monuments the Berlin Wall which gave us a clear understanding of the history of Berlin during World War Two and the Cold War. Furthermore these two days we went on a street art tour and even got the opportunity to do a graffiti workshop which were both interesting and amusing.

Saturday and Sunday were mainly focussed on interacting with refugees and understanding what help they need so that we could help refugees in the Netherlands. Saturday we got a tour of Berlin from a Syrian refugee. The refugee compared Berlin during World War Two and the Cold War to the current situation in Syria. The similarities between the two were surprising: basic human rights were taken away from civilians.

We had lunch at the restaurant that the Syrian Refugee owned followed by a volunteer workshop given by his older brother. On Sunday we interacted with refugees at a refugee center which was set up entirely by refugees and we also got to see the camps refugees stayed at while waiting for an asylum.

Berlin is a unique city due to its diverse architecture and wide variety of street art. 90% of Berlin was destroyed due to the bombing during the 2nd World War therefore after the 2nd World War when Berlin was divided into East Berlin, which was controlled by the Soviet Union, and the West which was controlled by the USA Berlin had to be rebuild. Still today the two sides look very different due to the different taste in architecture and amounts of money put into the different sides.

Refugees used to have good lives like we have but they were forced to leave their home. There are many reasons why refugees decide to leave their home for example because they lived in a conflict area, are forced to join the military or forced enrollment as child soldiers. Social media negatively categorizes refugees into one box however each refugee is an individual with their own story. There is a misconception in society currently that refugees are lazy and/or will “steal” your job but refugees that successfully, by this I mean alive, arrived in a safe zone are the strongest people you will ever meet. One refugee, Shabib, told us that he had to leave his wife and 1 year old daughter behind in Afghanistan because it wasn’t safe for him anymore. He walked from Afghanistan to Turkey while carrying his injured friend through the mountains on his shoulder.

In Turkey he was lucky to get a 7 hour long boat journey where a pregnant woman died. In Greece he had to take another boat journey to Italy where he continued his journey on foot until he reacher Germany. Shabib is currently waiting for an asylum for over 13 months in one of the government supervised camps where all of his basic human rights are taken away. The right to have freedom, right to education and right to have privacy are all taken away at these camps.While waiting for an asylum you have no opportunities; you are nobody. A german citizen who used to be a refugee told us that he waited 7 years to get an asylum. Maya Rowntree-Nelson, Yr 12 Some would question how Maya finds time to sleep?!. Her CAS portfolio and contribution to society is that immense! She’s a big advocate for sustainable living and in just six months of CAS she has embarked a massive twelve CAS experiences! Quantity is of course, not what counts but impressive nevertheless considering the depth of such experiences: 30 day Zero Waste campaign, TEDx, Christmas concerts, co-leader of the GIN Sustainability group, songwriting journals, urban farming, vegan cooking website and mindfulness. The list goes on! She’s now in the process of mobilizing her GIN group into working on a partnership with Lekkernassuh, an inspiring community run vegetable market. Given what you’ve achieved in 6 months, we can’t wait to see they impact you’ll have in the next year!

People who volunteer have good intentions however they often accidentally do the opposite. This occurs when volunteering work is expressed in a patronizing way or is enforcing refugees to do certain things that won’t help for example a few volunteers took some refugees to a theatre production while they didn’t even have basic needs such as water. Most refugees spoke negatively about the volunteer work they had received, not that they were ungrateful, but they felt the work was patronizing. When volunteer work is patronizing towards the refugees it makes them feel useless and not part of a community. This trip was a realization point for me. It made me realize my place in this world, how lucky I am with my life and how much there is wrong there is in this world. I feel obligated to use the privileges I was born with for a good cause and to help others. It was eye opening experience for me and I am forever grateful that I got this opportunity.