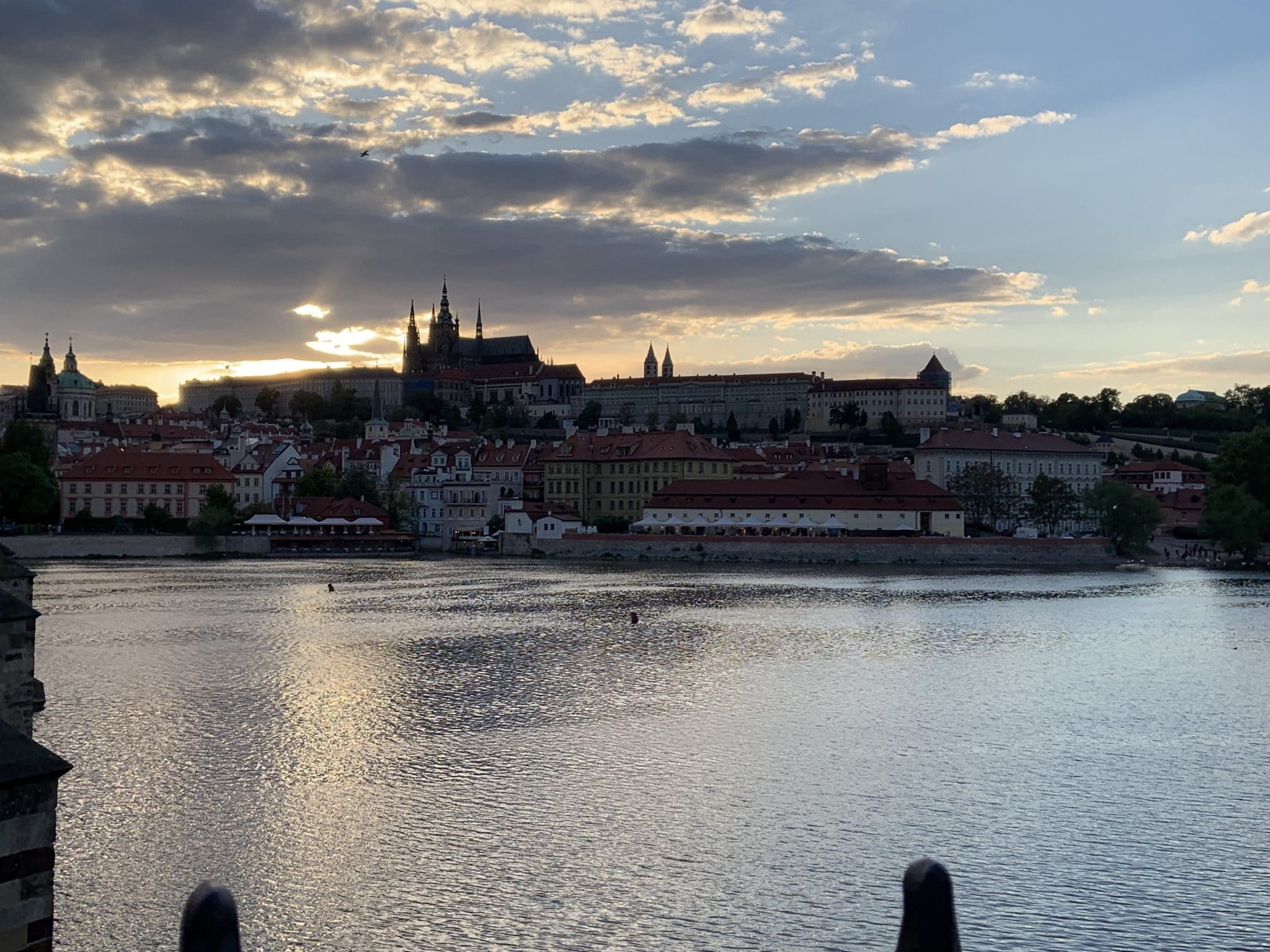 The first thing I remember when arriving at the main center of Prague, was the cobblestone streets and old churches that Europe is known for. I instantly recognized the lack of noise and cleanliness of the city while we were on our way to the hotel. We quickly got a sense of what the people of the city were like before even officially meeting a local.

The city looked nice, and obviously had many historical features in its architecture that I was sure we would eventually learn about. Our first meal was traditional goulash, which was something new and unique at a dark underground restaurant. The next day we travelled to the more suburban parts of the city, where we were able to raft and do archery while surrounded by the Bohemian nature.

I chose to refrain from rafting due to the cold weather and realized that I probably did not pack warm enough clothes for the trip, which did prove to be a challenge in the coming days. It was my first time doing archery and a local man taught us how to properly aim and shoot the bow. I performed surprisingly well for my first time, and actually enjoyed it a lot due to its relaxing nature and the satisfaction one gets from hitting the target. However, I did leave with sores on my fingers and forearms due to the impact of the string against my skin.

The next day we learned about street art and even had the opportunity to make our own. The weather was even colder than the day before, making it much more difficult to do anything. But despite the temperature, I really did enjoy both learning about the history of street art in Prague, as well as being able to make our own. It is a very interesting and unique modern form of art that has certain aspects that make it very enjoyable. Some things that drew me towards it included the bright colors that are often used in this form of art. I enjoyed the fact that mistakes in overlapping colors didn’t necessarily worsen the art, and the quickness of the entire street art process. On the same day we also met some very nice people from a German international school who we were able to socialize with throughout the afternoon.

The next day we spent the morning cooking a meal of spaghetti for a homeless shelter in the city. We learned some basic cooking skills, such as how to chop onions and cook ground beef, and were able to give back to some of the people of the city that was hosting us. Another interesting activity we did on this trip was a tour of the city with a formerly homeless man. He gave us the story of his life, and showed us how a single unlucky event can ruin one entire life. It was very interesting to learn about how homeless people survive on the streets, and it also helped me realize how lucky I am to be in the position I am in, and that I should be more grateful for the smaller blessings.

The next morning we were taken to a park in the city to learn how to draw specific objects in different ways. We were tested on our timed drawing ability and ability to draw without looking at the object. The goal of these exercises was to help us understand that we should not be ashamed about not being able to create perfect drawings, and that it is more about the process and understanding of the technique. Later that day we did a newspaper selling challenge in the main city square where we had to try and sell newspapers for charity. This was one of the hardest and most embarrassing tasks I’ve ever had to complete.

We spent about an hour walking around the square looking for anyone willing to donate anything for this charity organization, and only came out with a few euros. It was very hard to be constantly rejected by everyone passing you and made me feel very bad about myself. However, it did help me understand the difficulties of being homeless, and being forced to beg for anything in order to survive.

Overall, I enjoyed this trip and learned a lot about the city and myself. I learned that people act based on the environment they were raised in, and it is hard for some tourists to adapt to the cities way of life. I learned that I am not bad at archery or making street art and that they could be some potential hobbies. But most importantly, I learned about the struggles of living an unfortunate life, and that it is important to be grateful for what you have even if it may not be perfect.