When we arrived on the first day, our two CAS Guides, Kyle and Rob took us to eat in a very nice restaurant, before our introductory tour of Berlin. The tour focused on the city’s explosive history. We embarked on a journey through the centuries. The students, and teachers, learned a lot on this very first day. 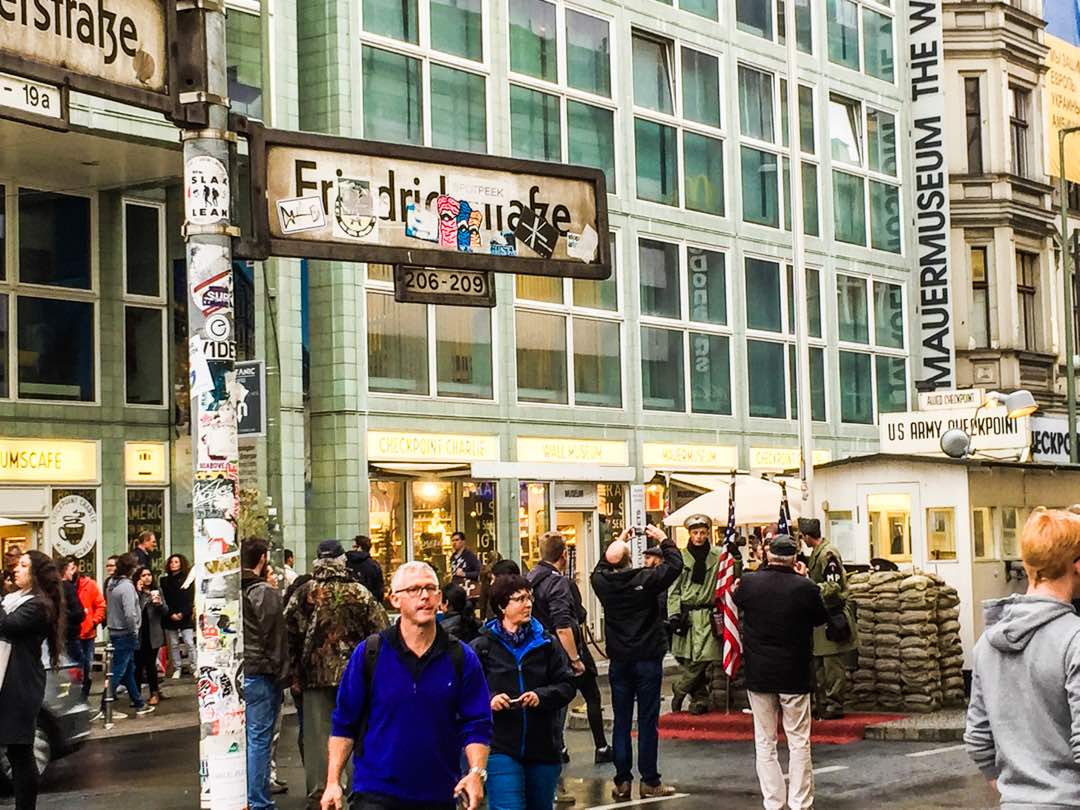 “We first visited the Brandenburg Gate and discussed its importance and its use. One of the best-known landmarks of Germany, it was built on the site of a former city gate that marked the start of the road from Berlin to the town of Brandenburg an der Havel, which used to be capital of the Margraviate of Brandenburg. We then located the Reichstag and discussed the way it was destroyed . We then travelled to holocaust memorial, the place for memorial of murdered jews. we instantly travelled to the famous car park of Hitler’s bunker. we then travelled to Checkpoint Charlien at Bahn kochestrasse.” – Judhadjit Ghoshal IB1 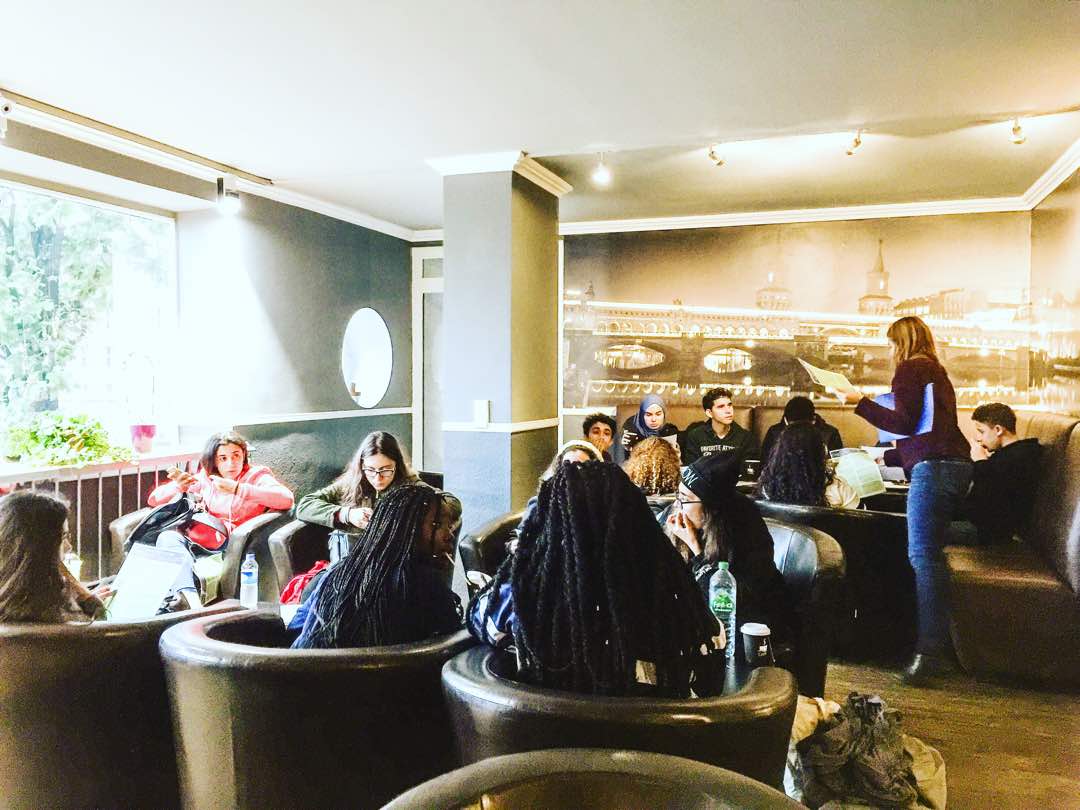 Despite the tiredness we stopped at a cafe to discuss and write the CAS reflections. 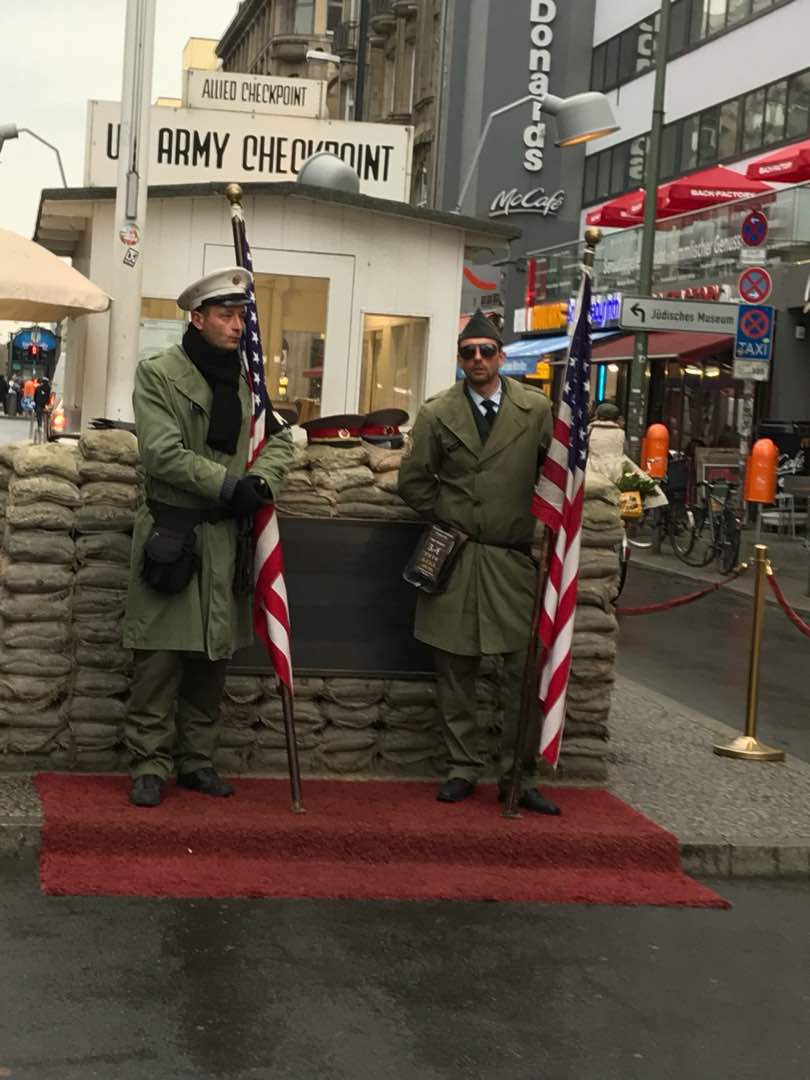 The second day, we were guided by two members of “Refugee voices” who helped us discover Berlin through the eyes of a Syrian refugee. The students, my colleague and I were captivated by this very special and informative historical tour of Berlin. 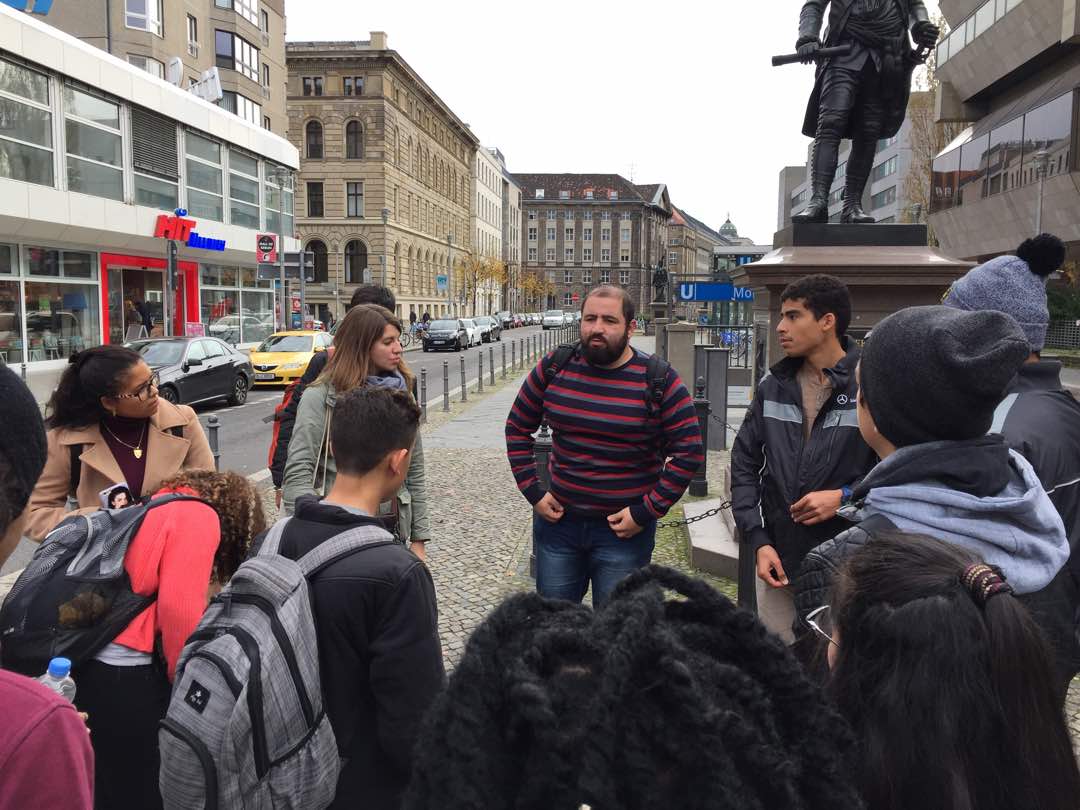 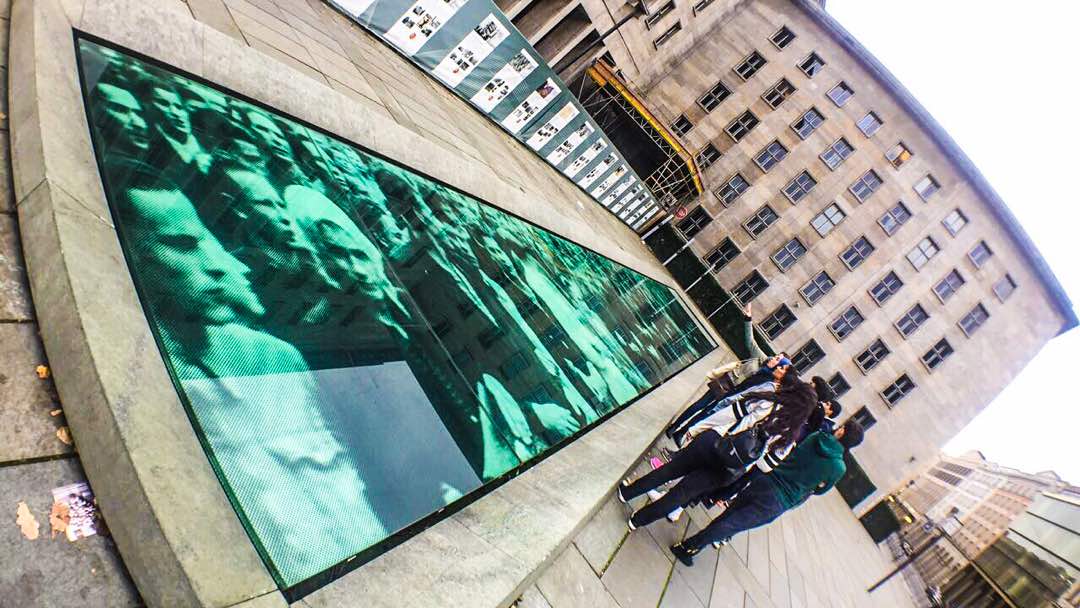 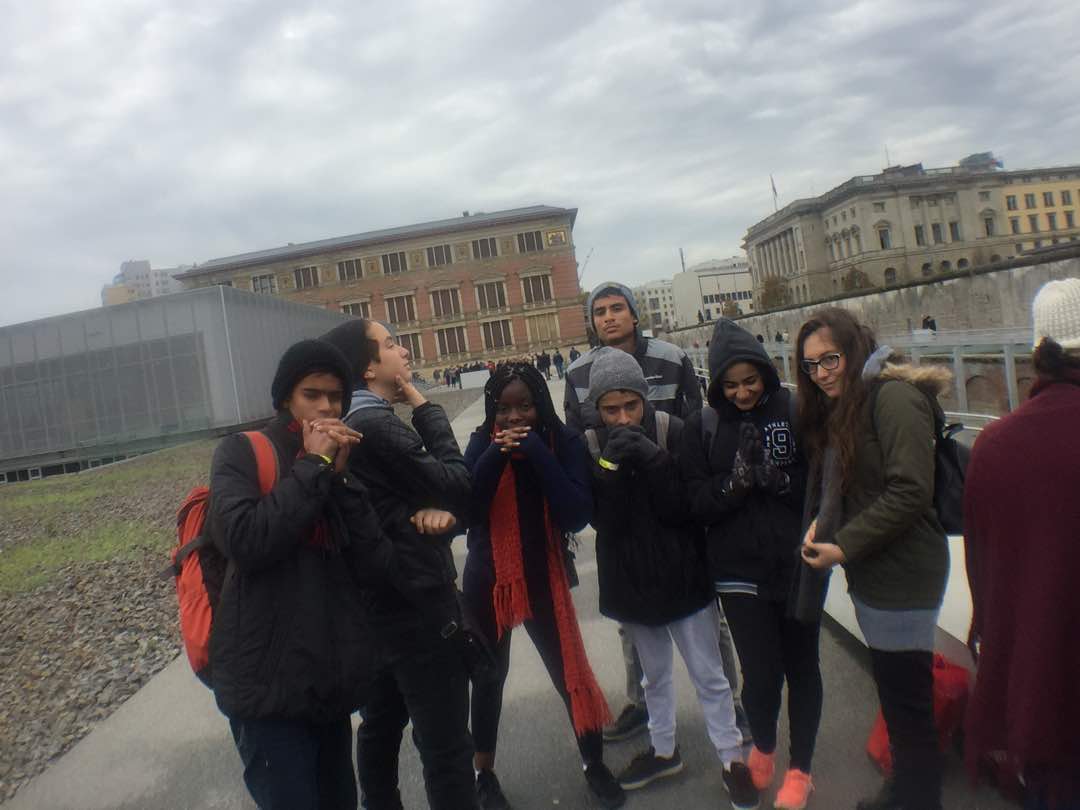 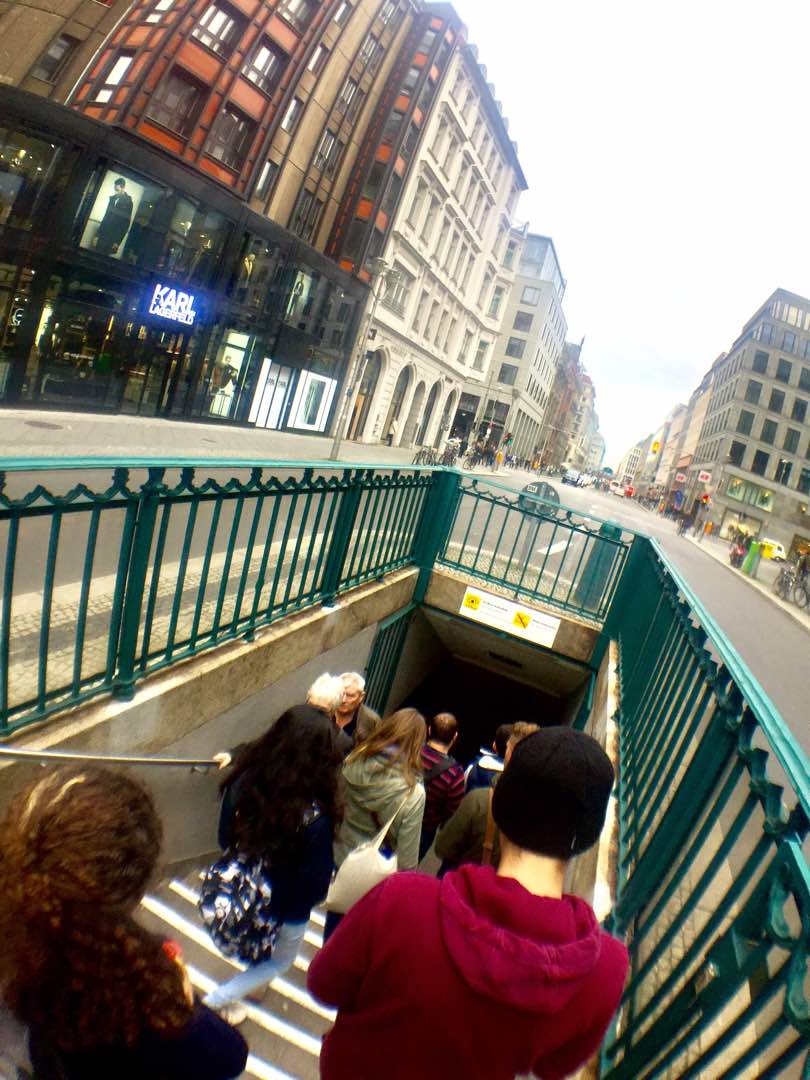 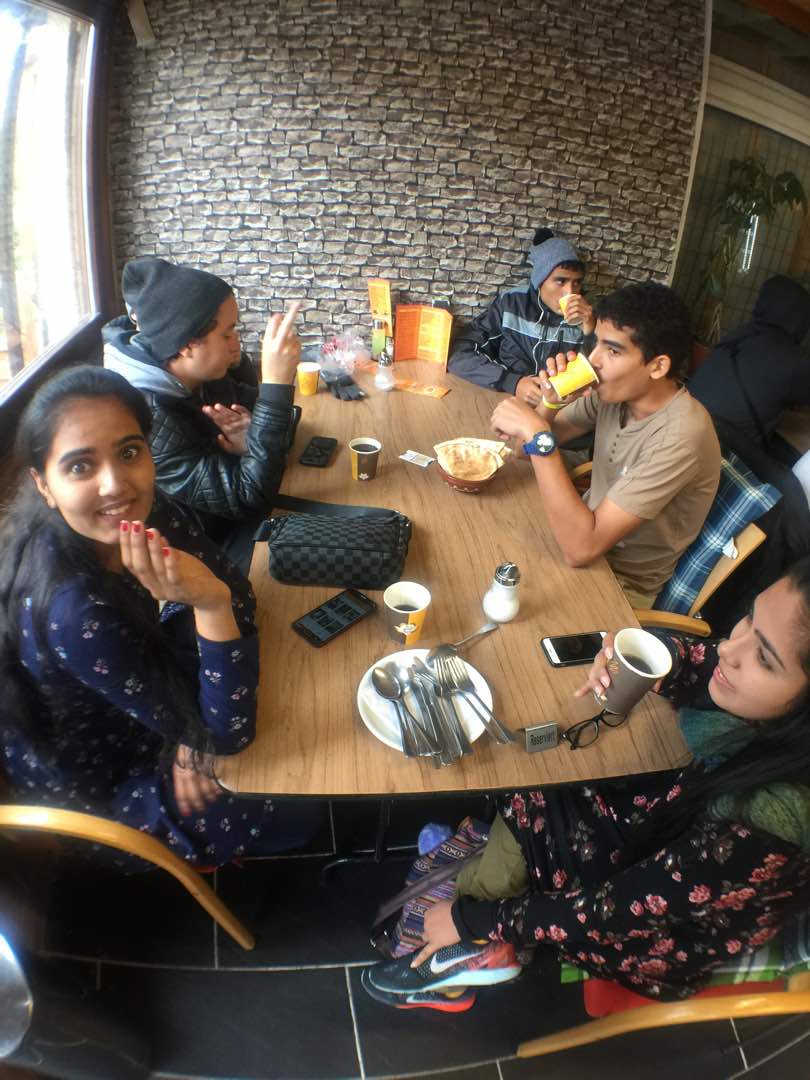 For the lunch this day, we ate et Mandi, a restaurant ran by members of Mohamed’s family, one of our two Syrian guides. The food was a wide range of Syrian foods and we all enjoyed it very much. 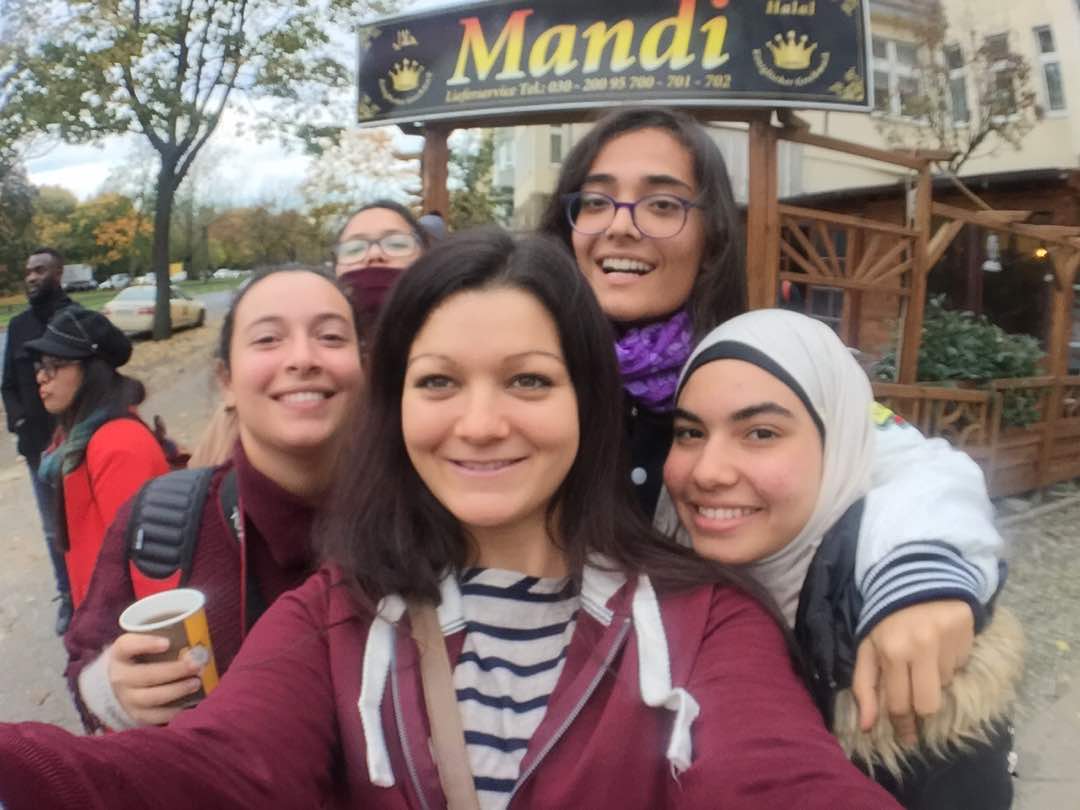 The afternoon of the second day was dedicated to Tempelhof Design Challenge. Students had 45 – 1hour of independent time to interview and look around the air field. Considered as “The mother of all ‘abandoned’ airports”, Tempelhof is a majestic huge free space full of life. Our students were exploring among people who were taking a walk, rollerblading or cycling and their mission was to interview some of them. The question was “How can we used this huge space in order to make it more useful for the community”.
Then we all moved to a cafe for time to design / present ideas.

We spent the third day in the “Refugee Voices” house. Many meaningful activities helped our students to understand better what it means to be a Syrian refugee in Berlin but also to understand better the situation in Syria and the choices Syrians have to make in their country: staying or leaving? 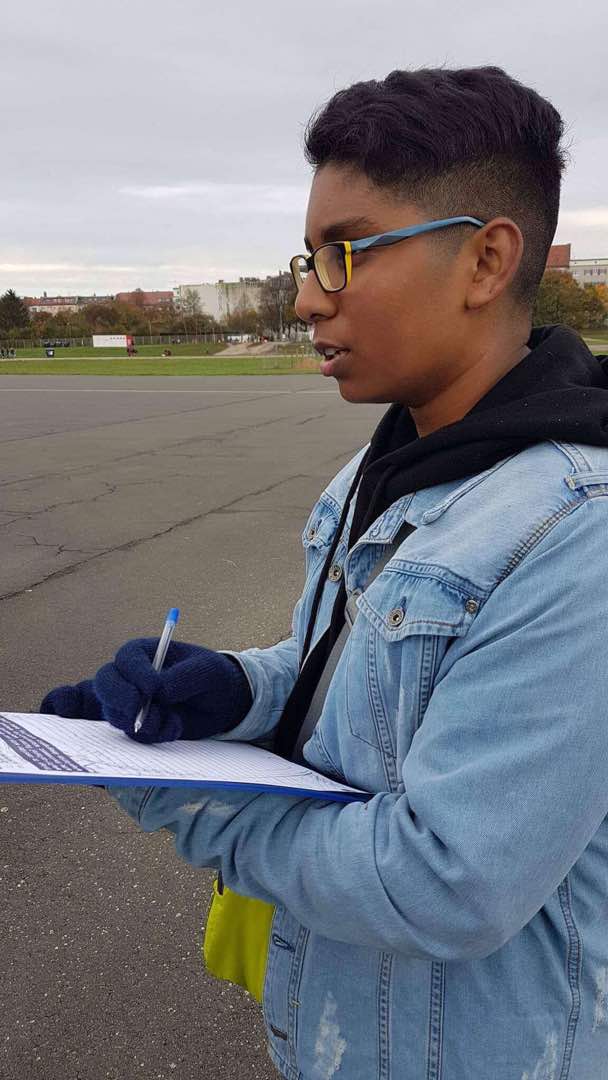 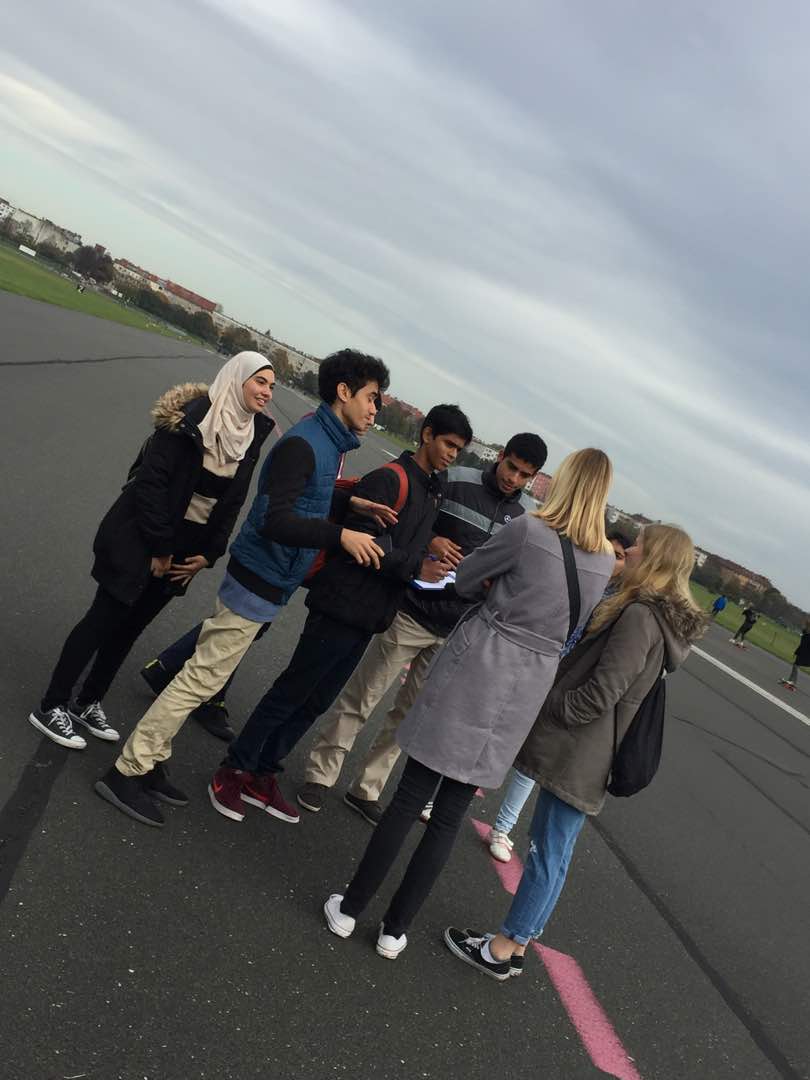 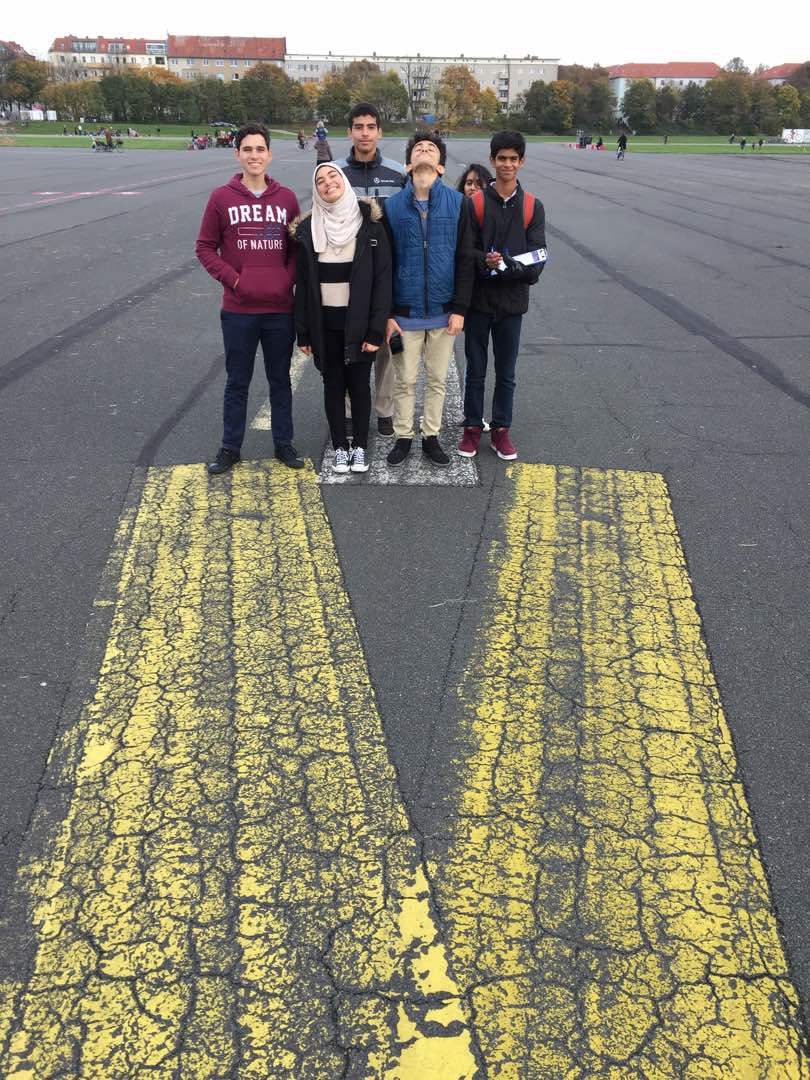 “The third day in Berlin was the same as the previous days, amazing! Right after having breakfast we headed off to a house were we met “Nebras and Eyzas” the two Syrian men we met the previous day. The house was warm and comfy. We all sat down in a room where there were so many tables and chairs and on each table an adorable mini flower pot. We met a new face to us which was another Syrian Man that spoke to us about the Syrian refuges.” – Sara Baroudi IB1 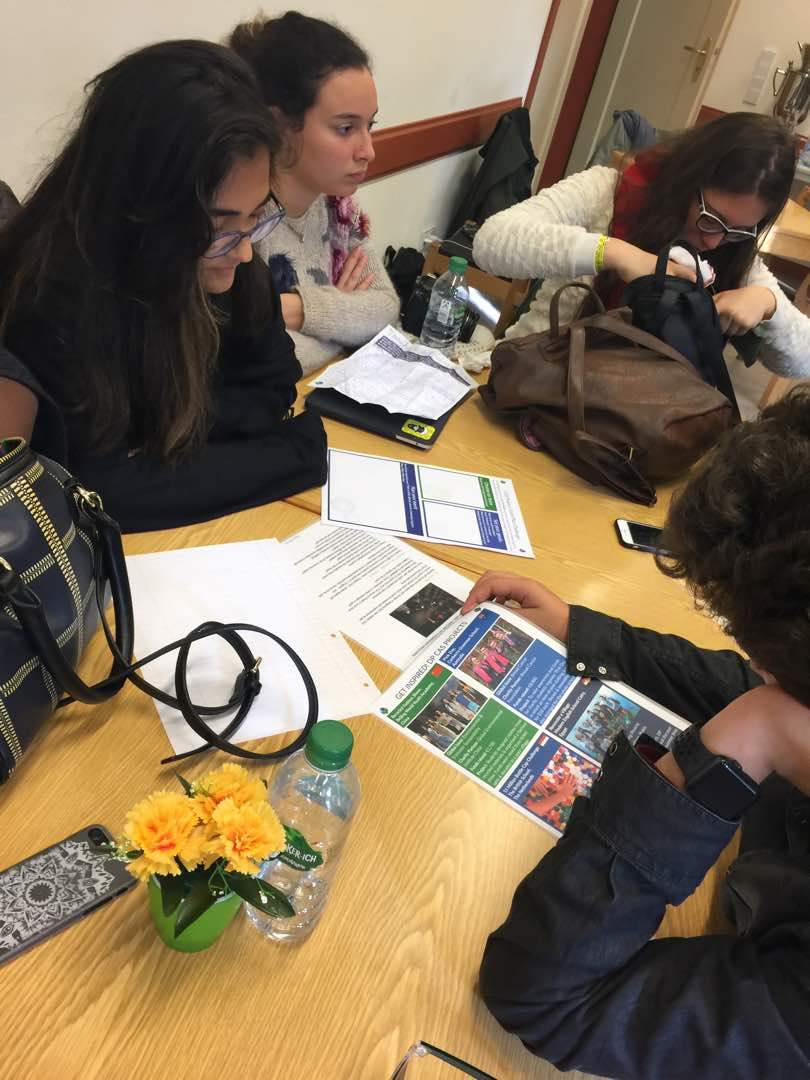 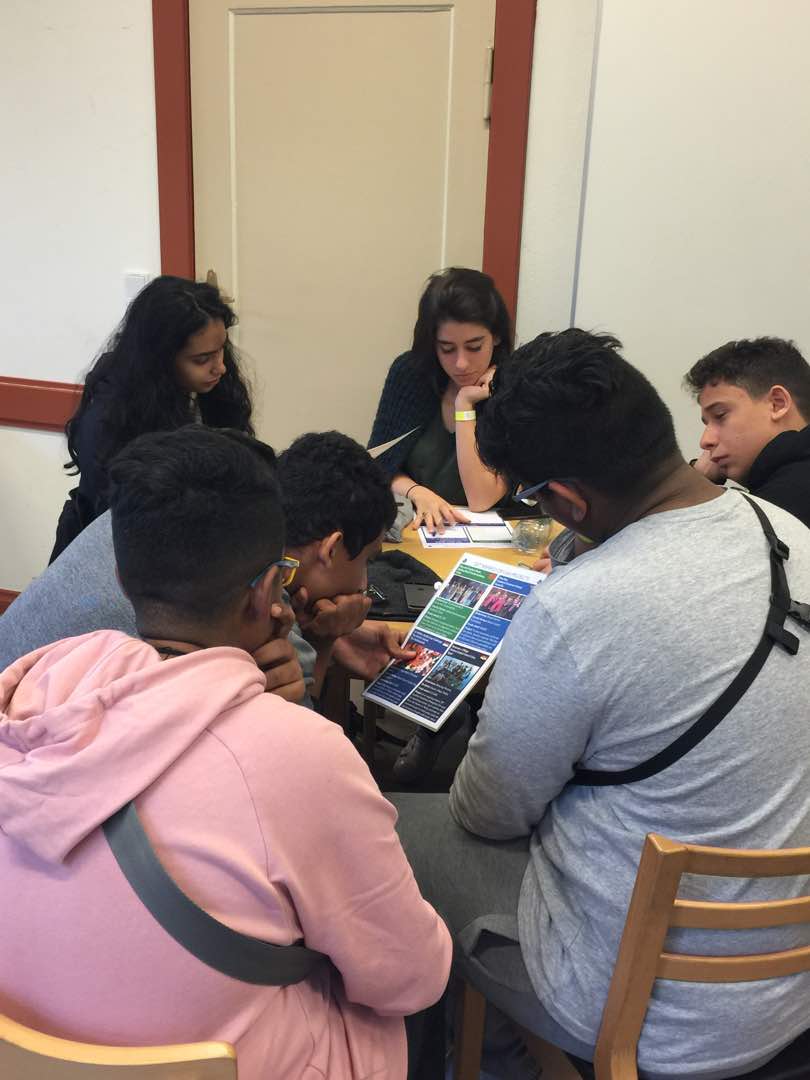 Six people formed a triangle with a rope while blindfolded. Three of the six people were not allowed to communicate in any way while the other three were supposed to organize all the six into a triangle merely by verbal communication. By using direction of tension and some teamwork, we managed to organize ourselves into an almost perfect triangle in less than five minutes. This taught us how to lead with a vision; how to move a crowd forward with an image you have that you are so sure about. We were taught not to move without a solid vision, as that may just lead to more chaos. Indeed, his activities delivered deep messages in an otherwise exciting method.” – Byrouthy Bashhar, IB2 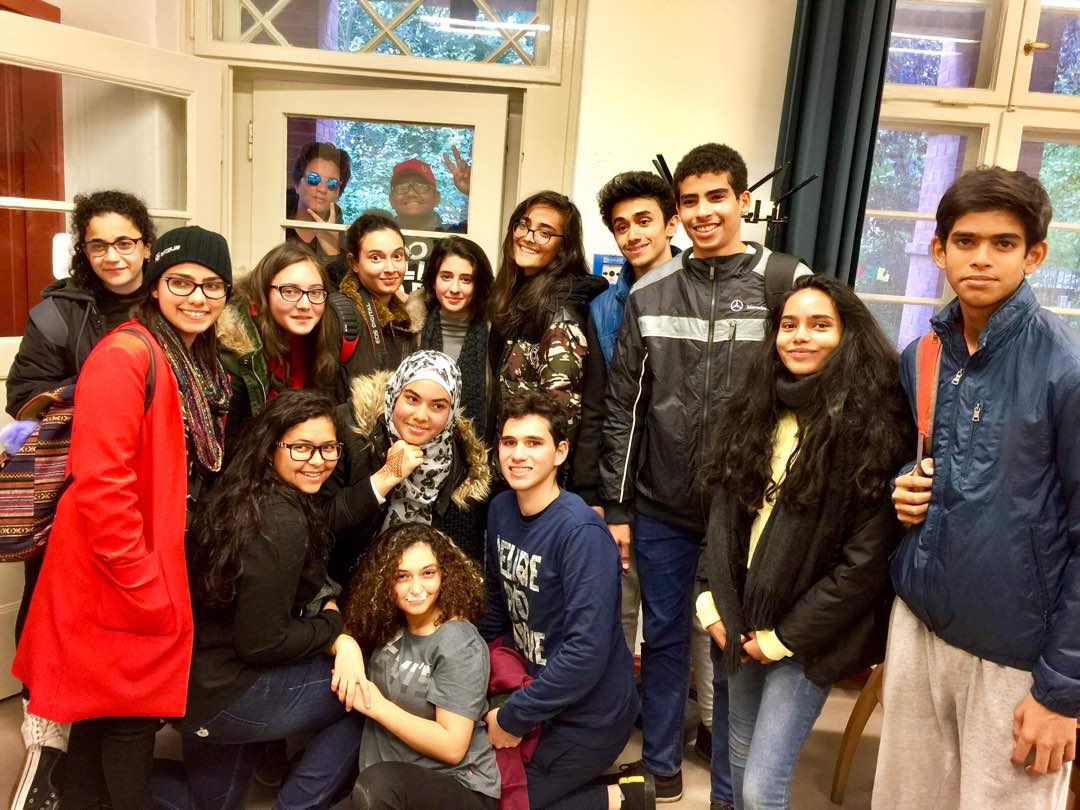 Our fourth day was the most creative one. We discovered the street art of Berlin. Literally everywhere around us. This beautiful introduction of street art leaded us to the East Side Gallery where all of us where invited to create our own master piece after some basic instructions. What a colourful day! 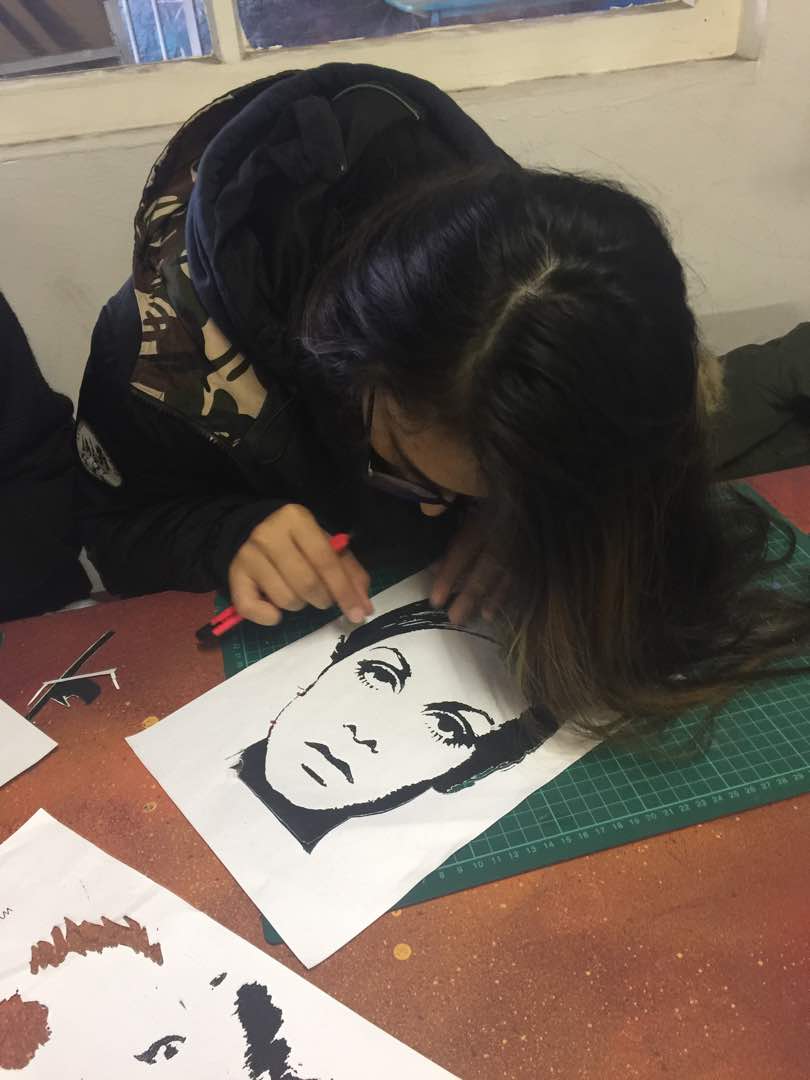 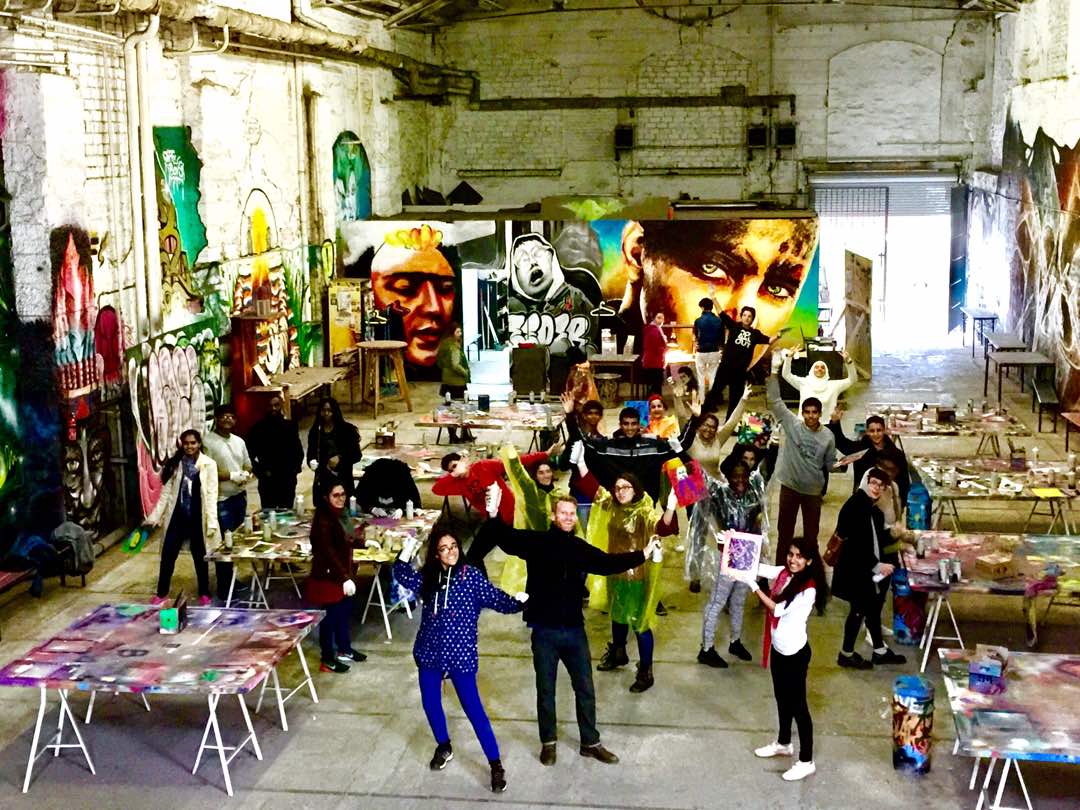 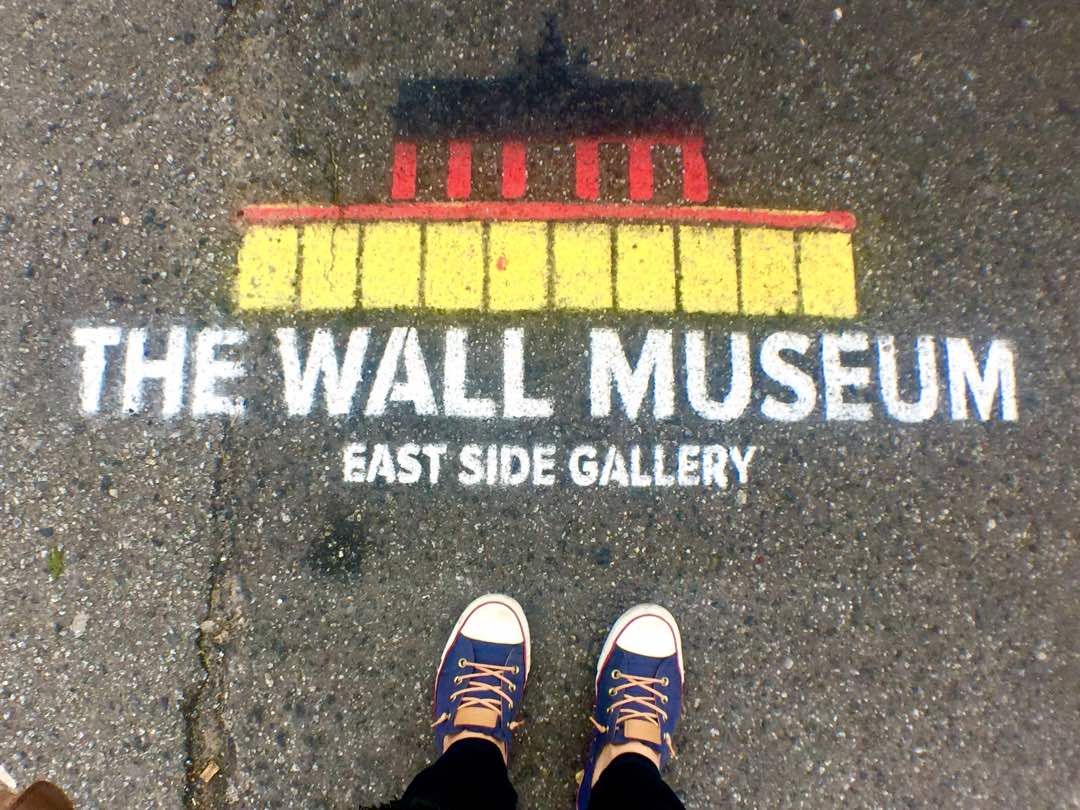 Shopping and treasure hunt in the city. After a free morning of shopping, our students participated in a big treasure hunt. In groups, they had to take 5 pictures in various locations. Thanks to this adventure, they had to remember all the information that were giving to them throughout this trip. Active and instructive, they all really enjoyed it! 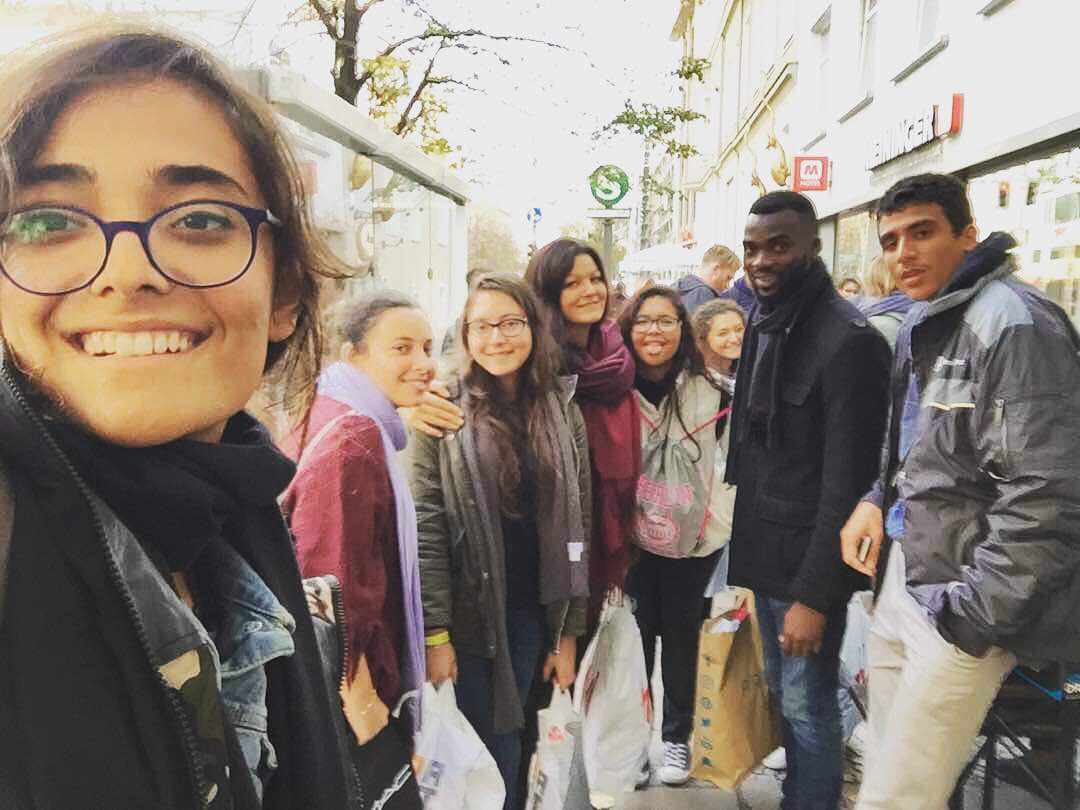 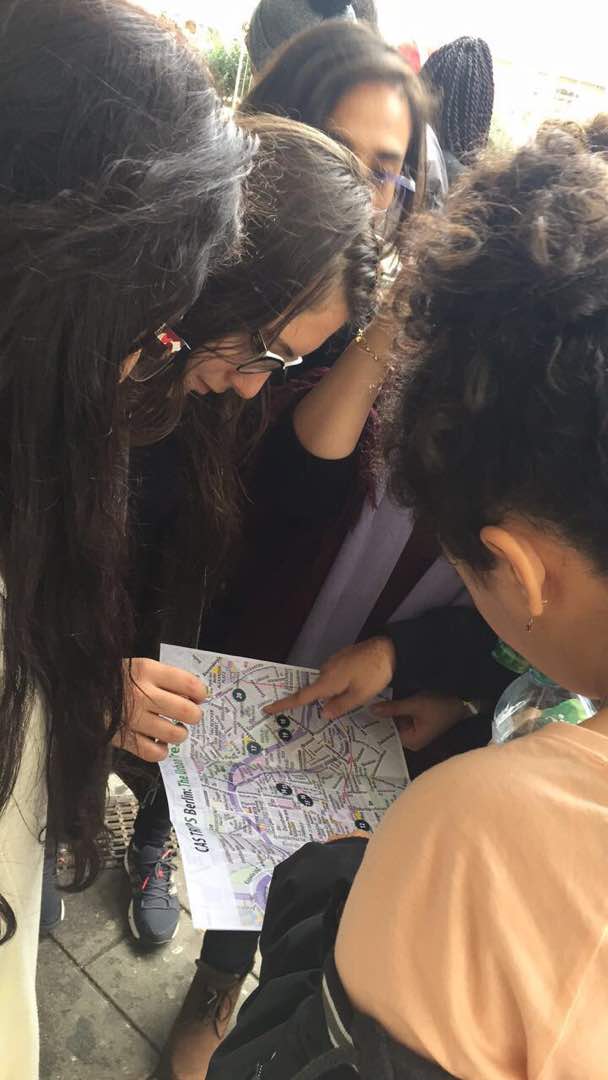 “They informed us that in this pulsating urban treasure hunt throughout Berlin’s historical center, we must work in small teams to decipher clues, navigate new territories in our own and race against the clock to answer all the 20 mystery history questions provided. I knew that this activity would rely greatly on my ability to work and communicate as a member of the team, as it would help discover my strengths and weaknesses and leadership skills.” – Nour Assad IB2

As the CAS Coordinator of Al-Rayan International School (ARIS) in Accra, I’m happy to share with you our first international CAS Trip in Berlin.

This amazing experience is the result of a great collaboration with the organization “CASTrips” and its director Simon Armstrong.

24 of our students (DP1 & 2) took part of this trip under the supervision of my colleague Mr Brew (TOK Coordinator) and myself (CAS Coordinator).

Nothing would have been possible without our two CAS guides Kyle and Rob but also Simon, Sophie and Callum from CASTrips who were working and supporting us behind the scenes throughout this incredible journey.

Thanks to them and our school, we created an unforgettable life experience for our DP students.