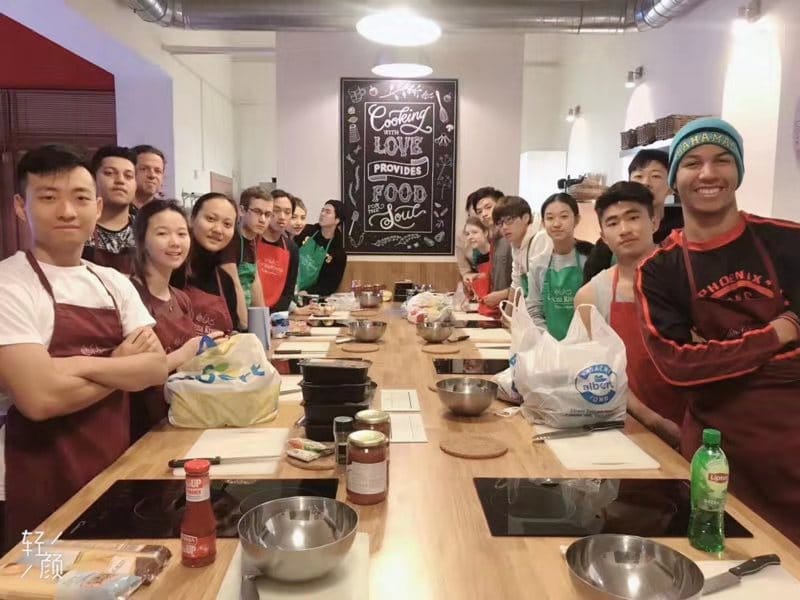 Emily’s Reflection: Cooking for the Homeless in Prague

Home » Emily’s Reflection: Cooking for the Homeless in Prague

Cooking for the Homeless Pre-Reflection

I went into the activity of cooking for the homeless feeling anxious and worried – I was afraid that it would be hard to collaborate in a group and that our final result would be a failure. Even if it was easy to collaborate, I was also worried that I would be placed into a group with people that had no cooking experience, and we would still not do a great job. My goal for this activity is to improve my skills working with people – collaboration and communication skills – and also gain some knowledge of basic cooking, which will help us in our future lives.

We first went to a supermarket to get ingredients after the 16 of us were split into four groups of four to make the spaghetti. When we got the ingredients, my group members did not follow the recipe that I looked up nor the one that the group looked up, and we decided to just get basic ingredients and “freestyle”. I was worried that “freestyling” would not lead to a great result, but did not deny their decision as I did not want to cause tension, which was one of my goals going into this activity. 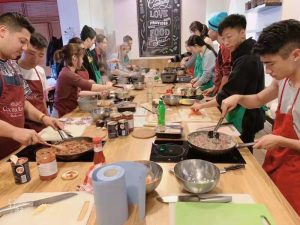 When I cooked the sauce for the spaghetti, I fried the onions and the garlic, but then mixed it with the tomato sauce instead of cooking it with the meat. “Oh no, it’s not going to taste as good”, I thought, trying to cut garlic as fast as possible and throw it into TaeSeo’s meat cooking pot, and quickly putting the minced meat into the tomato sauce stew that is now mixed with onions and garlic. Then, Dawid came up with an idea: “Let’s cook the spaghetti spices (we got one of the mixed spices previously in the supermarket) with the beef so it still has flavor!” All of us agreed to his idea, so we poured the remaining spaghetti spices into the minced meat and mixed it thoroughly, then mixed the minced meat with the tomato sauce when it was about 80% done. We left the meat with the sauce for a bit and tried the sauce that we made. “Oh my god!” Dawid said with excitement when he put a bit into his mouth, “This sauce is so good!” Yes, it was very good indeed. Although we had many bumps while making the sauce, we still managed to make an excellent sauce. All of our sauces, of the four groups, were mixed together when we transported it to the shelter. However, the other three group’s sauces tasted good as well, so the end product was very good! I had two bowls of the spaghetti we prepared, and moved on to listen to a brief introduction of the shelter by the social worker working there.

I learned that there could be many causes to homelessness in Prague, such as doing drugs as a child or going through a divorce as a grown up – all may lead to homelessness. There are also some people that are just voluntarily homeless. I learned that many homeless people prefer to live on the street, and that the shelters are almost never filled even though the amount of homeless outnumber the amount of beds in the shelters more than four times.

I value this experience greatly since it not only helped me bond with my classmates by cooking and practice my communication skills, but also let me do something good for the local society in Prague, leaving a mark in the place I traveled to.

The outcome was better than our expectations, and our teacher, Ms. Hackett, said that our food actually tasted quite good – she may have thought that it was poisonous or something before, so therefore I take this as a great accomplishment. In the future, I will use my ability to help those in need in my local community too, because before doing anything global, we should always keep our eyes in our local community first.