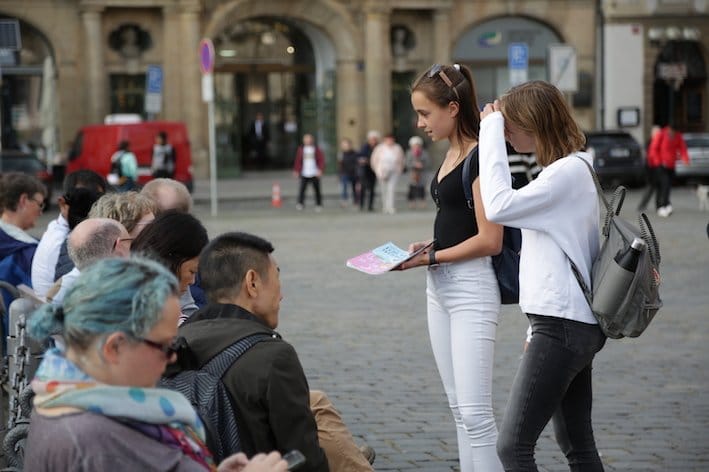 Hello, my name is Bella and I am from Australia, currently living in Switzerland. I am in Year 10 and as part of a school trip, we were able to travel to Prague, Czech Republic. Here we partnered with CAS trips to create an unforgettable experience that accommodated the three components of CAS; Creativity, Activity and Service.

The Novy Prostor Challenge allowed us to experience a popular job among the homeless: selling magazines that contain information about the homeless issue in Prague. A lot of homeless people can sell these to make a small amount of money for themselves and the shelter. We decided to take on the challenge for one hour. We sold the magazines, for 50 Czech Koruna each. We were given one place in the city and had to try to sell as many magazine copies, and make as much money as possible. The money then went to the homeless shelter that we had visited the day before.

We thought it was going to be easier for us to talk to people than someone who might be homeless. We were also children, so somebody would probably be more willing to listen to us. Our language skills were also more advanced, making it easier for us to communicate with potential donors. However, despite all of these advantages, we still struggled to sell up to 5 magazines.

I went into this activity expecting to stand in the street and hand out the magazines like fliers. I also did not anticipate much rejection and thought that 5 magazines were going to be easy to sell. I did not think about how people would react and how I was going to talk to people, therefore I think that I came into the activity a little underprepared. I was wondering, however, about how I would talk to people who speak Czech because they would be the main buyers (as the magazine was also in Czech).

Throughout the activity, we gained confidence and charismatic skills. Towards the beginning, we were worried to go up to someone, so we only choose people who seemed nice. We would then try to tell them about the magazine and mess up the dialogue because we had not yet thought of things to say. We were also inefficient because some people would not understand what we were trying to get them to do and they would just walk off.  As the activity progressed, however, we started to gain confidence and we went up to lots of people. We were still getting rejected, however, success was becoming more common.

We started to make a routine where I would approach people and ask them if they spoke: “English, Deutch, Español, Française, or Portugues” (our combined language choices). I would then continue the conversation if they spoke English, German or Spanish, or I would ask someone else in the group to speak to the person if they preferred another language. We became very efficient, and we got a small rush of adrenaline every time we would receive money, making us want to continue the activity for longer. We ended up making a total of 450 Czech Koruna (the equivalent of approximately 20 CHF or 18 Euros) which was an amazing outcome. We only sold 3 magazines, however, we were able to collect 300 Koruna through donations. One surprising story was when someone, who we later learned had just come from the pub, listened to us explain the issue and then pulled out about 70 Koruna himself, then told his friends to do the same. We were given about 200 Koruna from this group alone and we were very thankful for them.

I think that this activity had a huge impact on myself and for the other members of the group. The outcome was way better than any of us could have expected, and I think that we all learned a lot about how hard it is for homeless people to make a living. All of the money made by the 4 groups went to the homeless shelter to go towards supplies and other necessities. I thought that it was very impressive how most of the people took a second to stop and talk to us. It was disappointing, however, how many people made up such obvious excuses for not donating or blankly said that they did not care.

I think that in the future I will be on the lookout for people trying to sell these kinds of magazines and make the effort to stop and donate to the cause. I know that there are similar things in England and Australia. However, in Switzerland there is no homeless issue where I am so I have not gotten the chance to act on this yet. I hope that I remember this experience for a long time and hopefully run into another student in the future who is doing the same thing so I can help them in their challenge too.